Why the new Midtown Target store is a ‘game changer’ for retail inside St. Louis city limits 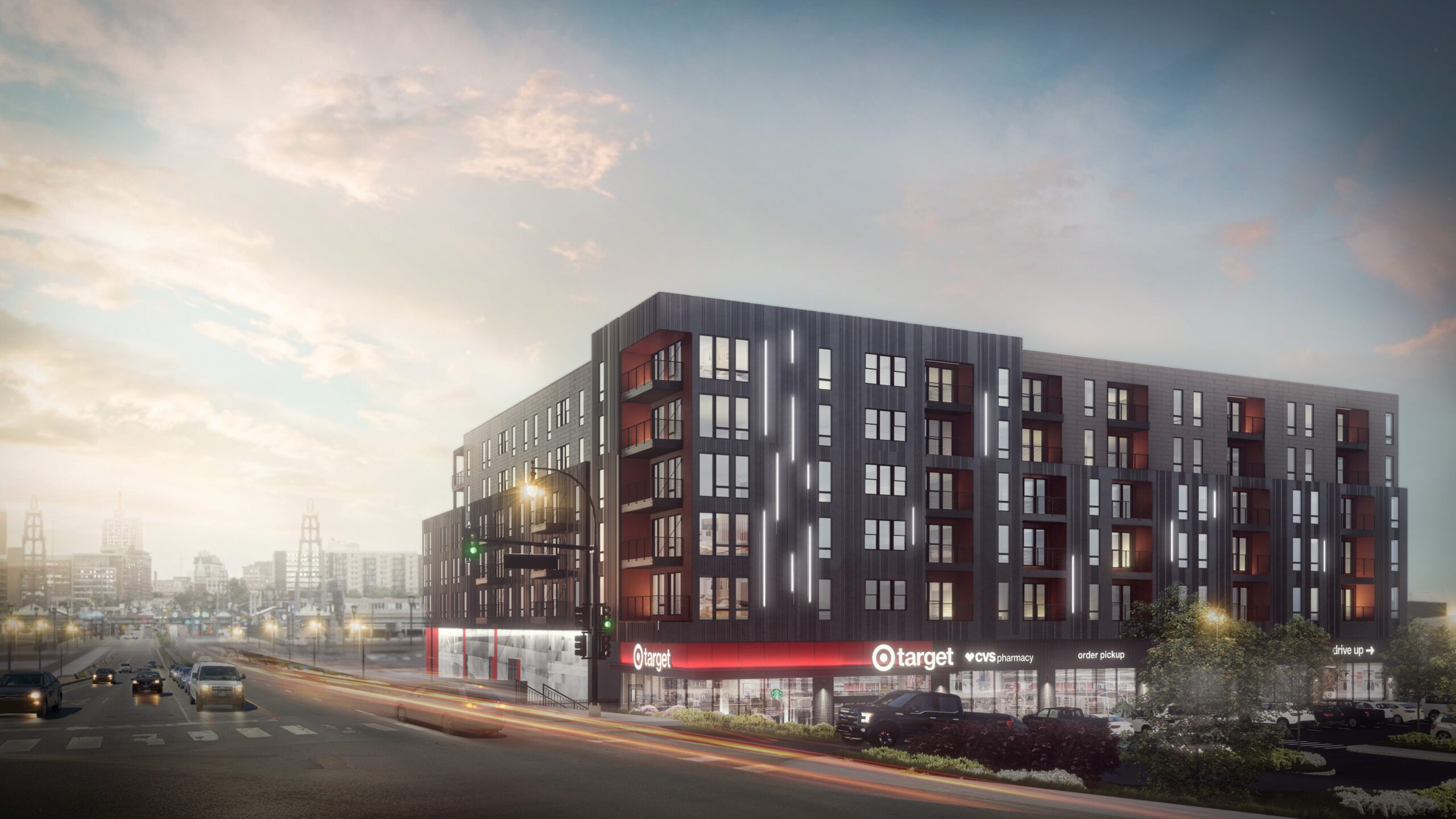 During the week, Saint Louis University’s campus shuttles ferry students around campus, stopping at classes and campus buildings. But on Saturdays, the only shuttle is for shopping.

Eight times each weekend, SLU’s shopping shuttle takes students on a 20-minute drive to the closest retail center to campus. One of its most popular stops is the Target at the Brentwood Promenade shopping center. The bus also stops at Walmart and Whole Foods.

But starting in summer 2023, SLU students looking to shop in Midtown won’t need to catch a shuttle to St. Louis County. Residents of Reinert Hall, a freshman dormitory, will be a three-minute walk from a new 70,000-square-foot Target store.

Richmond Heights-based developer Pier Property Group announced in October that a Target will anchor The Edwin, a new $60 million apartment and retail project it’s developing next to SLU along Grand Boulevard between Gratiot and Papin streets. Construction started this month.

Officials with the university said they had tried for nearly a decade to convince Target to open a store in Midtown. Now they, along with other local retail experts, believe the Minneapolis-based retail giant could become the catalyst that draws even more retail into the city limits.

“We’ve been dreaming of a Target for a very long time,” said David Heimburger, SLU’s chief financial officer, who also chairs the board of the Midtown Redevelopment Corp. that manages development on 400 acres around the campus, including The Edwin site. “It really is a game changer for our students and for Midtown.”

Most of the big-box stores in the city limits are clustered on the edges of south city, such as the Lowe’s at Loughborough Commons near Interstate 55, which opened in 2007. Although new stores were still opening in that development in 2019, until this year Loughborough and the 2015 opening of Ikea near Midtown were the last large big-box retail sites built in the city limits.

University officials had been talking to Target for a decade, but finding a space to fit a full-size store — which the retailer says averages around 130,000 square feet — was difficult. Michael Hamburg, owner of Pier Property Group, said he had long heard “rumblings” that Target desired a Midtown location, so he “cold called” company representatives in February or March.

The prospect of landing a new St. Louis store had become more likely in the past several years, when Target began opening smaller-format stores in urban centers and around colleges. Those stores are typically around 40,000 square feet but can be as small as 12,000 square feet. As of 2019, Target said it had more than two dozen small-format stores on or near college campuses.

At 70,000 square feet, the new Midtown store will land between the typical small-format and large-format stores. But people involved in the deal say the Edwin location was attractive to Target because of how it offers some of the benefits of both formats.

Target was drawn to The Edwin for its close proximity to the SLU campus, but also because, unlike other urban Target stores, it will also have room for traditional parking lots, said real estate broker Rick Spector of L3 Corp., who represented Pier in the Target transaction.

“It allowed them to get much closer to their traditional store in an urban setting, and those two checkmarks are what was finally able to get them over the hurdle of, ‘how do we do something in this area?’” Spector said.

Even before Target signed on the dotted line, Heimburger and retail brokers saw a turning point for Midtown with the $300 million mixed-use City Foundry STL development, which opened St. Louis’ first food hall in August. Prior to the Nov. 10 opening in City Foundry of a new flagship grocery store for Fresh Thyme Market, Midtown had no grocery stores.

Developers plan to bring even more entertainment choices to Midtown as part of 180,000-square-foot The Armory development and the ongoing buildout of City Foundry, where construction has started on the two anchor tenants, mini golf restaurant Puttshack and dine-in cinema Alamo Drafthouse.

Patrick Willett, a broker with Pace Properties who is working to bring unique or new-to-St. Louis retailers to City Foundry, said it can be difficult to convince national retailers to be trailblazers in the central corridor. Ikea and City Foundry started to overpower those concerns, but Willett said an “iconic” retail brand like Target will serve as a beacon for other retailers looking to locate in St. Louis for the first time.

“Once they get to town and feel the momentum, it becomes a whole lot easier, but you’ve got to get over the hurdles,” Willett said. “When we brought Ikea into Missouri and into the city limits, that was the beginning of credible retail happening in the Midtown area. And now you have Target and Fresh Thyme and Puttshack and Alamo Drafthouse — we’re really starting to build some incredible momentum.”

Spector is on a similar hunt for the retailers that will surround the new Target or future developments around The Edwin. That search got much easier by signing Target, which he called “every retailer’s best co-tenant.” He also credits the new $550 million SSM Health Saint Louis University Hospital, Pier’s existing new apartments already built in Steelcote Square, and the boutique retail experience in the Central West End as key lures for the Target.

A second St. Louis-area Topgolf location could also be coming to SLU-owned land at the northwest corner of South Compton and Chouteau avenues , just a few blocks east of The Edwin.

“There’s a lot of things that got Target to this point, but Target is going to help us get to that next step after that,” Spector said. “What this can do to an area is so much greater than what people realize. This will be very, very good for the area and the retail market in general.”

More to come from SLU

Despite university officials’ commitment to landing a Target, even they were taken aback by students’ response to the Target news, which was the most-shared page on SLU’s website all year, and one of its most popular ever.

Beyond the initial enthusiasm, it’s not yet known whether the new Target could help increase enrollment or recruitment. But Heimburger said officials have long known that a Target store close to campus would make students happier, which is why university officials were so committed to making it happen.

“It’s interesting that something non-academic could generate this much excitement on campus,” Heimburger said.

Now that Target is coming, the university is focused on bringing more entertainment options to property SLU controls around the campus, as the social and emotional aspects of student life become more central to campus culture. The Midtown Redevelopment Corp. can grant incentives to developers, and the board is in talks with Target. That’s separate from tax abatement talks between the city and Target, which are ongoing.

Heimburger said the university is in talks with several large national developers about “transformational opportunities” that could open near campus, though he declined to provide details at this time.

“I don’t think that we’re looking to be West County. It’s going to have a unique flair,” Heimburger said of the potential developments, pointing to City Foundry’s anchor tenants as examples of the types of retail options that students, employees and the community would love to see the most. “We’re not trying to reinvent anything, just capitalize on what came before us. It’s just exciting.”

TARGET AT ‘THE EDWIN’

What: The Edwin will be a 196-unit apartment complex in Midtown anchored by a Target store